The TERF War hotting up again

It seems that the TERF War is hotting up again. What is the TERF War? It is a vicious fight to the death between the old school feminists, now labelled Trans Exclusionary Radical Feminists (TERFs), and the trans lobby. What’s interesting about it is that it’s not just a power struggle within the Coalition of the Fringes, the sometimes uneasy coalition of victim groups who comprise the modern Cultural Left and dominate allegedly leftist parties like the Democrats in the US. This is an existential struggle in which neither side will, or can, back down.

The issue is nothing less than the existence of women. The position of the trans lobby is also the position of the LGBT lobby as a whole and is now the official party line of the Cultural Left (and is accepted by a large segment of the Political Right). That position is that biological sex is irrelevant. Sex is infinitely fluid. If you have male genitals but you put on a frock you’re as much a woman as anyone who was born a woman. If you have female genitals and you announce that you are a man then you are as much a man as someone born a man. It is also an essential part of this ideological position there are dozens if not hundreds of genders.

The problem for the TERFs is that they cannot possibly accept this. If your sex is something you can choose and discard at will then feminism collapses entirely. Feminism is based on the premise that there are two distinct sexes, male and female, and that the female sex has been (and still is) oppressed by the male sex. It is a crucial element in old school feminism that sex is something you’re born with. If you’re born a woman then you are part of that half of society that is exploited and oppressed by the Patriarchy. If you’re born a man you’re an oppressor. The TERFs therefore have absolutely no choice. They must take a stand on the reality of biological sex differences. That is the hill on which they must fight and if necessary die. Any retreat means abandoning feminism.

There are several fascinating aspects to the TERF War. One is that the TERFs are largely (although not exclusively) lesbians. They’ve learnt that being a lesbian is no protection from being labelled as a hateful Nazi bigot if you happen to get on the wrong side of the trans lobby. In fact old school lesbians (who are so deluded that they think they’re women) are now increasingly marginalised within the LGBT lobby that they played such a large part in creating. The hatred between the trans activists and the lesbian TERFs is breathtaking in its intensity.

And as was pointed out in the discussion on the recent Terf or Trans post on Oz Conservative it raises questions about the future of the old school feminists within the Coalition of the Fringes. They are in fact actively hated by many of the other members of that coalition. Is there a chance they might jump ship? More interestingly still, is there a chance they might find themselves expelled from the Coalition of the Fringes? What makes this an interesting question is that although the actual political power of the old school feminists is almost zero on the other hand when it comes to raw numbers they’re a very significant slice of that coalition. And they are politically very disciplined. They wouldn’t have to actually jump ship. If they simply decided, en masse, to stay at home on election day the results could be interesting. It’s hard to see the Democrats, or the British Labour Party, surviving such a defection.

Of course there’s also the fact that there are a lot women who are not lesbians or TERFs but are still rather uncomfortable with the militant trans agenda. Women like J.K. Rowling (an ardent SJW) who is currently being vilified as a hateful transphobic bigot for her bizarre belief that the human species is divided into biological men and biological women. These are women who in general have totally supported the SJW agenda but they are not surprisingly less than thrilled about being told that women don’t really exist.

So the TERF War could get kind of interesting.
Posted by dfordoom at 1:21 AM 9 comments:

the collapse of morality on the Right

Following on from my previous post, another change which may explain the apparent leftward political shift of women is the collapse of the Right as a moral force.

Men have no great difficulty in basing their voting behaviour on self-interest. They may despise a particular party but will still vote for it if they believe they personally will be better off. Women in general have more difficulty with this. They like to think they’re voting for a party or a candidate that stands for something moral and good.

That’s all changed. If the Left has changed out of all recognition since the 60s, so too has the Right. The elections of Thatcher and Reagan were watershed moments. The mainstream right-wing parties became explicitly the parties of corporate profit and individual selfishness and greed. Never again would a mainstream right-wing political party in the Anglosphere even contemplate taking a moral position on anything.

The parties of the “Left” on the other hand now seem to stand for the moral and the good. In fact of course their ideas on what is moral and good are distorted and bizarre (and in practice often extremely immoral) but at least they seem to have a moral stance.

The mainstream Right now stands for nothing other than greed. It has abandoned even the pretence of morality. It’s another possible reason that women appear to have moved leftward - women are never going to be entirely comfortable with political ideologies based purely on open explicit selfishness.
Posted by dfordoom at 8:25 PM No comments:

Of course it has to be said first of all that the political parties for which women are more likely to vote today are not really left-wing at all but clearly there’s something going on. Maybe women are more likely to favour the status quo? That’s possible but I think there’s more to it. I do think it’s likely that women favour stability. Fifty years ago parties of the Right seemed to offer stability. These days, whatever it is that right-leaning parties offer, it certainly isn’t stability. Fifty years ago the parties of the Right also seemed to stand for strong government, which women tend to like, while today it’s the parties that identify themselves as leftist that seem to be the ones favouring strong government.

The disparity between male and female views on politics become more marked when we look at fringe political ideologies. Consider libertarianism. Are there any women libertarians? I’ve never encountered one. Which is hardly surprising. Rugged individualism, the struggle for survival, the survival of the fittest, complete selfishness, the fetishisation of individualism - the world that libertarians dream about has little to offer anybody but it offers nothing whatever that is likely to appeal to women.

It’s also noticeable that on the alt-right there’s a certain unwillingness to admit that women may have a point about some things. Anyone who has ever had the misfortune to live through a period of instability will agree with women that there’s a lot to be said for stability. Silly talk about civil war also turns to turn women off. Women have a fair idea that the chaos that the alt-right seems to want will be very bad for women, and also very bad for the men that women love.

Political movements that have achieved some degree of success are usually those that appeal to women as well as men. I’m very sceptical that the dissident right will ever achieve anything anyway but it’s certainly not going to enjoy any success if it is unable to attract a reasonable degree of female support.
Posted by dfordoom at 1:35 AM 4 comments: 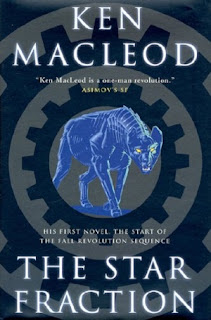 When you think about it though it does make sense. Science fiction is all about creating imaginary universes. If you don’t like the laws of physics you just ignore them. Faster-than-light travel might be impossible but if you want faster-than-light travel in your story you just pretend it’s possible. It’s a game of make-believe. And libertarianism is of course a game of make-believe. Libertarianism could never work in practice but libertarians just pretend that it would work.

Which brings us to Ken MacLeod’s 1995 cyberpunk science fiction novel The Star Fraction. MacLeod is an interesting figure. He was a Trotskyist activist back in the 1970s. When the Left ceased to exist he had to find some kind of ideology that would offer the same attractions - a better and more just society. Perhaps he’d done too many drugs in the 70s because he seems to have invented a kind of amalgam of libertarianism and Trotskyism.

The hero of the novel is a security  mercenary who is a good and loyal communist. He hates socialism and he loves capitalism. Because capitalism apparently equals freedom and will therefore magically bring about an ideal communist world. This will happen because, well just because.

It’s no coincidence that the characters in the story smoke a lot of dope. Because if you really want to believe that libertarian capitalism will achieve communism you have to smoke a prodigious amount of dope.

The novel appears to be set around the middle of the 21st century. Like most of MacLeod’s work it deals with multiple futures - Britain is a multiplicity of different statelets, even including a fundamentalist Christian one (which surprisingly isn’t mocked or derided quite as much as you’d expect). This idea of nation states fragmenting into semi-independent quasi-state entities has popped up quite a bit in science fiction since the 80s and of course it’s an idea with a certain appeal to some modern right-wingers. It’s interesting to see the idea approached here from a left-wing perspective.

Of course it has to be noted that MacLeod is most definitely not a conventional left-winger.

One of the more interesting ideas in the book is a rogue computer virus that is a kind of self-contained revolutionary program, but the question is what kind of revolution? This is a question that exercises the hero of the story quite a bit. Being a good communist he think the Party should control the political program. This is a program that seems to have the ability to control the Party.

Like most of MacLeod’s work the book is packed with ideas. Some are, it has to be admitted, quite silly (although no more so than the ideas you’ll find in the works of right-wing science fiction writers of an earlier generation, such as Poul Anderson). But others are genuinely provocative and intriguing. It's not as good as his later Newton's Wake but The Star Fraction is an odd little science fiction novel but quite interesting from a political point of view.
Posted by dfordoom at 12:05 AM No comments:

quotes for another day

"The great charm in argument is really finding one's own opinions, not other people's." - Evelyn Waugh

"An artist must be a reactionary. He has to stand out against the tenor of the age and not go flopping along." -  Evelyn Waugh

"You have no idea how much nastier I would be if I was not a Catholic. Without supernatural aid I would hardly be a human being." - Evelyn Waugh

Evelyn Waugh: How do you get your main pleasure in life, Sir William?
Sir William Beveridge: I get mine trying to leave the world a better place than I found it.
Waugh: I get mine spreading alarm and despondency and I get more satisfaction than you do.
Posted by dfordoom at 6:44 PM 1 comment: