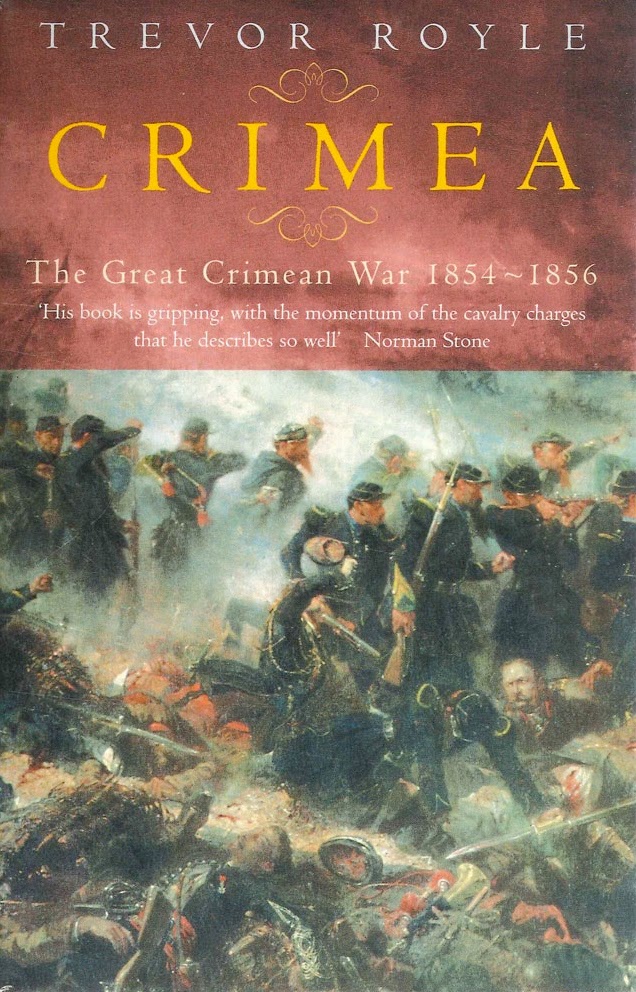 Trevor Royle’s Crimea: The Great Crimean War 1854-56, published in 1999, is an exhaustive and fascinating study of one of the most controversial conflicts of the 19th century, a conflict that has considerable relevance on our own era.

In the early 19th century the Ottoman Empire controlled a considerable slice of eastern Europe but the empire which had once seemed likely to dominate the entire continent (they went very close to capturing Vienna in 1683) was now clearly in decline and had become known as the Sick Man of Europe. The problem was what to do if the Sick Man actually died. A further problem was that the British at least suspected that the Russians might be planning to hasten his demise. British policy was to maintain the Ottoman Empire at all costs. It was obvious that if it collapsed Russia would strengthen its position in eastern Europe and central Asia, and perhaps strengthen its position just a little too much. As always the British feared for India. And if Russia gained control of the whole of the Black Sea she would have unrestricted access to the Mediterranean.

In the early 1850s a dispute between Orthodox Christians and Catholics over control of the Church of the Holy Sepulchre in Jerusalem gave the Tsar Nicholas I his opportunity, and brought Russia and France into collision. The Ottomans declared war on Russia and the subsequent Russian naval victory at Sinope left Russia effectively dominating the Black Sea. Britain and France then declared war on the Russians, a move that eventually led to the landing of an Anglo-French invasion force in the Crimea.

The Crimean War is widely regarded as a classic example of a futile and unnecessary war. That’s perhaps not entirely accurate. The Tsar did have a sincere interest in the rights of Orthodox Christians within the Ottoman Empire and the British did have legitimate reasons for fearing an imminent Ottoman collapse and for fearing the consequences that were likely to follow. The so-called “Eastern Question” bedeviled European politics for a century and provided the spark that ignited the First World War. The echoes continued for another century, the bloody disintegration of Yugoslavia in the late 20th century being a result of the failure to solve the question satisfactorily. There were real issues at stake. Whether it was wise for the British and French to become directly involved was another matter. The French Emperor Napoleon III wanted to restore France to the dominant position she had held in Europe prior to the defeat of his uncle and namesake in 1815 and saw the war as a means of achieving this. The British government was to a large extent stampeded into war by the hysteria of the British press.

The Crimean War ended in defeat for Russia but it proved to be far more expensive in money and lives than had been anticipated and the final result was not entirely satisfactory from Britain’s point of view. The campaign in the Crimea exposed disastrous faults in the organisation of the British Army’s supply and medical services and those faults cost the lives of many more British soldiers from disease than from the actual fighting.

The dangers of being drawn into eastern European wars was a lesson that European statesmen had to learn again in 1914, and it seem that the lesson may have to be learnt yet again in our own day. Of even greater relevance today are the astonishing parallels between the demonisation of Nicholas I in the British press in the early 1850s and the demonisation of Vladimir Putin by an equally irresponsible and hysterical media.

Royle gives a very fair account of the war, recognising the extreme difficulties faced by Lord Raglan as British commander in the Crimea, and refusing to demonise any of the main actors in the drama. The only real villains are the British press. Royle’s book can be warmly recommended.
Posted by dfordoom at 5:47 AM No comments:

Could even Labour be worse than David Cameron?

With "conservative" Prime Minister David Cameron planning sweeping crackdowns on what's left of freedom of speech in Britain it's surely time to ask - can even Labour be worse than this? The argument  that even a lousy Conservative government is better than having a Labour government is now looking rather threadbare. Trying to scare potential UKIP voters by telling them that they may be helping Labour gain office now seems beside the point. The only possible hope for Britain is for the Cameron Conservatives to be utterly smashed. Then it may be possible to build an actual conservative party out of the ruins.

I've been saying for some time that traitorous so-called conservatives like Cameron are more dangerous than avowed leftists. This would seem to prove my point. In David Cameron's Britain this is what the Justice and Security Act means - " It prevents those accused by the government from seeing the evidence against them, or the witness testimony against them. The individual concerned would also be unable to submit evidence – or even enter the courtroom, if it is deemed to be in the court’s interests. In fact, the court will not even have to inform the person concerned of why they have been taken to court, or even that a trial is taking place. It could mean that the first a person hears of a case against them, is when the police turn up to take them to jail to begin their sentence."