A recent exchange on an internet forum got me thinking about morality. Of course most conservatives (possibly excluding some neocons and libertarians) would agree that there has been a decline in morality over the past half century. But perhaps it’s a bit more complicated than that.

The explanation for these two conflicting viewpoints would seem to be that social conservatives on the one hand and the majority of people today on the other hand mean very different things when they speak, or think, about morality.

Up until the 1960s morality was a more or less universally accepted set of codes for behaviour. These codes were relatively stable and they were generally shared even by people with differing political ideologies or religious beliefs. That’s a generalisation of course but I think it’s basically fairly accurate.

Since the 1960s morality has become a number of widely differing codes of behaviour that change rapidly and sometimes unpredictably. And these codes vary wildly depending on one’s political ideology or religious beliefs.

In fact since the 1960s morality has become to a large extent a matter of fashion. The problem is that most people today are quite unaware that what they believe to be the moral codes now generally accepted by society are merely matters of fashion. And they do not realise just how very dangerous this is. It is dangerous for society, but it is also dangerous for the individual because it means living in a constant of tension. If you have somehow failed to keep up with this year’s model in some area of morality then you can suddenly find yourself quite unknowingly transgressing some rule that you didn’t even now had changed.

For social conservatives the main peril is social disapproval, but social conservatives have become so accustomed to social disapproval that we generally don’t worry too much about it. It’s the liberals one has to feel sorry for. Their entire sense of self-worth is totally bound up with their rigid adherence to the very latest changes in political correctness. One false step is for them social death. It’s no wonder liberals are always angry - they live in a perpetual state of stress.

Of course one could legitimately question whether a morality that changes constantly can truly be described as a morality at all, but that’s another issue.

Posted by dfordoom at 4:42 PM No comments: 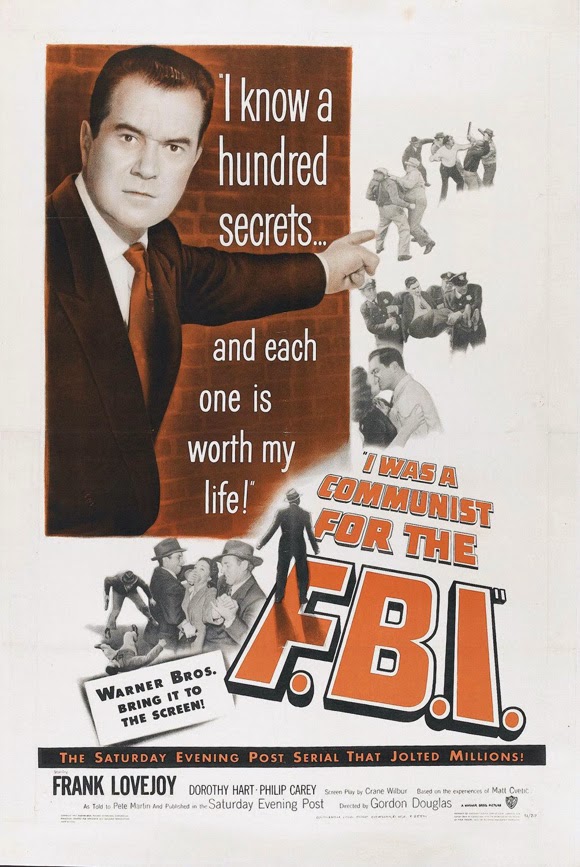 I’ve been getting into 1950s anti-communist movies recently. These movies have for years been dismissed by liberal film critics as paranoia movies. In fact they depict the activities, the methods and the mindset of communists pretty accurately. And at least a couple of these movies can be regarded as pretty good examples of film noir.

I’ve reviewed two these films recently on my classic movies blog - RKO’s 1949 production The Woman on Pier 13 (originally released as I Married a Communist) and Warner Brothers’ 1950 offering I Was a Communist for the FBI. The latter was based on a true story. Both movies deal with communist infiltration of labour unions, which was in fact one of the favoured methods of the Communist Party at that time, both in the United States and in other countries.

If these movies have a fault it’s perhaps that they let the unions off the hook too easily, but Hollywood has always been a union so it was unlikely that a movie critical of the union movement was ever going to get made. In fact given the large-scale real-life communist infiltration of Hollywood and the domination of Hollywood by liberals it’s surprising that these anti-communist movies got made. The only problem with the movie industry’s response to communist infiltration, the blacklist, is that it didn’t go far enough.

Both of these movies are worth a look, both for their historical interest and as worthy examples of the film noir of the period. They're a reminder of a time when Americans were still willing to fight back against leftist tyranny.
Posted by dfordoom at 7:14 AM No comments:

One of the many unsettling features of life in the West today is that atheists on the whole are more religious than Christians.

Over the past couple of decades atheism has been taking on more and more of the characteristics of a religion. When you talk to n atheist these days it’s obvious that their faith is very important to them. This is very odd indeed. There have always been atheists but atheists who display all the classic features of religious enthusiasm and religious extremism used to be comparatively rare. Most atheists used to be motivated by scepticism. Atheists today are increasingly motivated by faith.

Atheists have also become extremely defensive. The fact that some people still believe in God angers them. They regard religious belief in the way the Catholic Church used to regard heresy - as something threatening that needs to be stamped out.

We have also seen the curious phenomenon of evangelical atheism. A growing proportion of atheists have become aggressive proselytisers.

What’s most disturbing about this is that atheism has adopted all the worst features of organised religion without any of religion’s compensating good features. Atheists have become religious bigots. They seek to impose their beliefs and their values on others.

By comparison Christians today seem at best lukewarm about their faith. Most of the established churches have largely abandoned actual Christianity in favour of a vaguely spiritual warm and fuzzy socialism. It is increasingly rare to find Christian clergymen who are prepared to defend their beliefs. Instead they seem obsessed by the desire to compromise with their enemies, to the point that they are prepared to surrender on virtually every point.

The dangerous thing about evangelical atheism is that it is usually accompanied by evangelical leftism. Leftism of course has always been a religion. People do not adopt leftist beliefs for logical reasons. They are motivated by an unfortunate mixture of guilt, self-hatred and self-righteousness. leftism is fundamentally irrational.

Adding evangelical atheism makes the mixture even more toxic. It produces a truly demoralising belief system. You just have to ask yourself when was the last time you met a happy atheist. Atheism has not only become a religion, it has become a religion of anger, misery and despair.

Posted by dfordoom at 7:11 AM No comments: