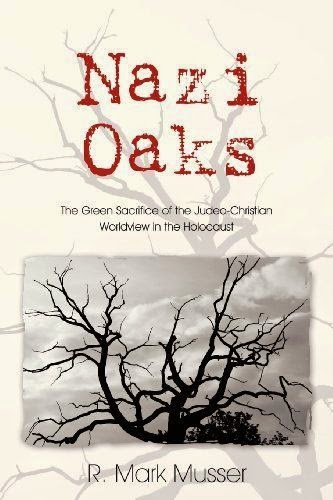 R. Mark Musser’s book Nazi Oaks points out the chilling links between environmentalists and the Nazis in pre-war Germany. Even more chillingly it demonstrates that the mindset of radical environmentalists is astonishingly similar to the Nazi mindset.

Hitler’s National Socialist government was the greenest government in human history up to that point. It was not just that environmentalists joined the Nazi Party in huge numbers. The senior Nazis were almost without exception fanatical environmentalists. Hitler, Himmler, Rudolf Hess and Goering were all ardent greens.

The concept of lebensraum was essentially an environmentalist concept.

A recurring obsession among Nazis was what they saw as the problem of overpopulation. They believed cities were the source of much of the evil in the world. The German people would be much healthier if they returned to a rural existence. The problem with that is that quite obviously there were far too many Germans to make it a practical solution. That’s where the concept of lebensraum came in. If Poland and the Ukraine could be emptied of their existing populations there would be plenty of room to allow the majority of Germans to return to an idyllic rural existence.

Of course you have to some kind of pretext for removing those existing populations. That presented no problem. If Jews and Slavs were not really human, if they were subhuman (untermensch), then there could be no objection to removing them. And how to remove them? That was no real problem either. If these populations were subhuman there was no reason why they could not be used as slave labour. Those who were not suitable for such labour could simply be exterminated in the same way that a gamekeeper exterminates vermin. Those who were used as slave labour would be worked to death and within a few years they would have been effectively exterminated as well.

The Nazis also intended to thin out the population of Germany itself by eradicating all those who were deemed to be either useless or antisocial. Hence the Nazi euthanasia laws. Those who were unfit either physically or morally would be shipped off to the death camps.

It should be noted that the Nazi plans for reducing the population to what they considered to be an optimal size were not entirely based on race. Jews, Slavs and Gypsies were not the only ones shipped off to the death camps. Ideological enemies of the Nazis were also marked for extermination. This is a point we need to keep clearly in mind.

Modern greens have a chillingly similar view. They also see overpopulation as the biggest problem. If the planet is to be returned to the state of a pristine wilderness then obviously most of the human population will have to be removed. Whenever they are asked how this can possibly be achieved they became, not surprisingly, very evasive. It is fairly clear that they hope that abortion and euthanasia will do part of the job but when the objective is to remove 95% of the human population (and this is in line with the stated objectives of many green groups) then it’s obvious that more drastic measures will be needed.

The ground is already being prepared for those more drastic measures. There is a growing demand among environmentalists for climate change deniers to be imprisoned. It is not difficult to predict that the next step will be to strip climate change deniers of their civil and legal rights. Once that is done then the greens will have succeeded in isolating and dehumanising a large slice of the population, turning them in effect into untermensch.

And if climate change deniers are stripped of their rights, then surely it is only right and proper that anyone defined as being racist, sexist or homophobic should be accorded the same treatment. That’s where the environmentalists’ alliance with other extremist leftist groups such as gay activists and hardline feminists will prove to be very useful. There are lots of ideological enemies who can be turned into untermensch, just as the Nazis found lots of ideological enemies they could dehumanise in the same manner.

You might think this is all very far-fetched. And it is, except for one thing. It’s already beginning to happen. The groundwork has already been laid.
Posted by dfordoom at 12:48 AM No comments:

the demonising of Putin

I’m increasingly dismayed by the willingness of otherwise sensible conservatives to swallow the mainstream media’s view of Vladimir Putin as the New Hitler.

The mainstream media hates Putin because he acted to stop gays from propagandising children in Russia. For conservatives to buy into this anti-Putin nonsense is dangerous and silly.

And trying to make analogies between the current Ukraine crisis and appeasement of Hitler in the 1930s demonstrates that these days even conservatives are often frighteningly out of touch with reality.

It’s also betrays a dangerously simplistic view of history. Neville Chamberlain’s policies towards Hitler were realistic. Britain and France did not have the capability to save either Czechoslovakia or Poland. The end result of the final decision to go to war over Germany’s invasion of Poland was that Poland suffered six years of misery under the Nazis and four decades of misery under Soviet communism. Britain and France ceased to be major powers. The only winner in the end was Stalin.

Sometimes doing something merely to gain a warm inner glow can be worse than doing nothing, especially in cases where there’s nothing useful that can be done.

The only result of the current confrontation with Russia will be to make Russia anti-US. So the US will gain another enemy. Nobody will win. The people of the Crimea have made it abundantly clear that they wish to be part of Russia. Their wish should be respected.

The socialist EU would also be well advised to mind its own business.

The demonising of Putin serves no useful purpose. It is a distraction from more important issues, such as the pitifully weak US policy towards Iran. Iran is a real problem with real relevance to US interests. Neither the Crimea nor the Ukraine have any such relevance.
Posted by dfordoom at 7:14 AM No comments:

Greens get a savage kicking from Tasmanian voters

Labor’s defeat in the Tasmanian election is good news in itself, but what makes it really sweet is the absolute kicking the Greens got from the voters. It seems that the tide really has turned against the Greens in Australia.
Posted by dfordoom at 8:39 PM No comments:

One of the most disappointing things about the Abbott government in Australia so far has been its unwillingness to grasp the nettle on a number of key issues. Reform of the ABC is one of these issues.

In the 21st century there is absolutely no justification whatsoever for a taxpayer-funded national broadcaster. It is a concept that is at least half a century out of date. It was never a particularly brilliant idea but in today’s world the ABC is entirely unnecessary. It is obsolete. It is a dinosaur. A dinosaur that costs the lomg-suffering Australian taxpayer 1.2 billion dollars a year.

Nobody needs the ABC. There are countless sources of news these days. Most are far more reliable and far more honest than the ABC.

The concept of the ABC is worse than useless. A government-funded news provider is an idea that should have been consigned to the scrap heap of dangerously stupid ideas after the fall of the Soviet Union. It is something one expects to find in a totalitarian state like North Korea. It has no place in a free society.

The ABC as a supplier of news is an outrageous enough waste of money. But why, for pity’s sake, should the taxpayer be funding the ABC so that it can make entertainment programs? Governments do many unnecessary things but it is difficult to think of anything more unnecessary than the government milking the taxpayer so that the ABC can make drama and comedy programs that are watched by a tiny handful of people.

The extreme bias of the ABC is certainly an issue, but it is not the main issue. The main issue is that a publicly funded national broadcaster is simply unnecessary and represents taxpayers’ money flushed down the toilet.

There are many options for reforming the ABC. It could be turned into a subscription-only service so that the few people who want to watch ABC television or listen to ABC radio would be the ones paying for it. It could be supported by advertising. It doesn’t really matter which option is chosen, as long as the end result is that the taxpayer no longer has to pay for the ABC. The taxpayer should not have to pay a single cent towards maintaing the ABC.

It is possible that an ABC run on commercial lines or operating as a subscription-only service would not turn out to be economically viable. In which case it should simply be allowed to die. Most people would not even notice its demise. The parasites who currently work for the ABC could then go and look for real jobs in the real world.
Posted by dfordoom at 5:45 PM No comments:

Email ThisBlogThis!Share to TwitterShare to FacebookShare to Pinterest
Labels: the media

Of course it’s very easy for people in countries like the US, Britain and Australia to take this simplistic moral view. The US has not had to fight a foreign invader on its soil since the War of 1812. Britain has not been in that situation for centuries. Australia has never been in that situation. Russia however has had plenty of experience of fighting foreign invaders on its own soil. They knew just how unpleasant that experience is. Not surprisingly they tend to view foreign policy rather more realistically and rather more pragmatically than Britons or Americans.

From the Russian point of view anything that happens that affects Russian national interests in places like the Ukraine has to be approached as a potential threat.

What is most surprising about Vladimir Putin’s handling of the situation is its moderation.

Those in the west currently wringing their hands about these events might also like to remember that the Crimea is populated predominantly by ethnic Russians. It is not Ukrainian and never has been. The Crimea was part of Russia until Khrushchev’s short-sighted decision in 1954 to transfer it to the Ukraine. It’s not a question of whether Russia will annex the Crimea. That would merely represent the return of Russian territory to Russia.

Posted by dfordoom at 8:48 AM No comments: