Nicholas Wade’s Before the Dawn 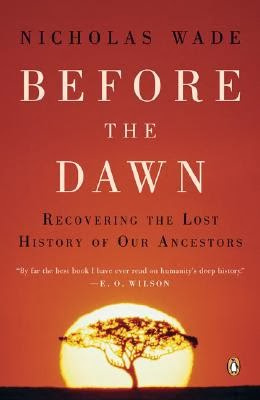 Nicholas Wade’s Before the Dawn: Recovering the Lost History of Our Ancestors, published in 2007, is a book that describes the way our new knowledge of the human genome has amplified our understanding of the history of our species and added some important and surprising new dimensions to it.

Wade is a science journalist with the New York Times. The idea of the book is to present these advances in our understanding in a way that is accessible to the general reader without dumbing things down.

The most important point the book makes is that evolution does not stop, and that human evolution has not stopped. The usual view had been that once our evolution reached a certain point, around 50,000 years ago, with the appearance of behavourially modern humans, it suddenly stopped and culture took over. Wade believes that recent research blows this idea out of the water.

Modern genetic science can not only track changes in the human genome, it can date them. And some of these changes, such as the development of lactose tolerance, are (in evolutionary terms) very recent indeed.

Anatomically modern humans appeared around 100,000 years ago. At that time there were three human species - our ancestors living in Africa, Homo erectus living in a wide range in eastern Eurasia, and the Neanderthals living in western Eurasia. At first our species had no particular advantage over the other two. All three species remained on more or less the same cultural level for around 50,000 years.

And then something changed, and changed dramatically. Our species shot ahead. Archaeological remains tell the story of rapid cultural advances. Not long after this a small group of our ancestors left Africa. They spread throughout Eurasia and as far as Australia (which was then part of a larger continent). All humans outside of Africa are descended from the small group, possible as few as 150 individuals, that left Africa 50,000 years ago.

At that time the most recent Ice Age was far from over and the glaciers would advance and retreat several more times. Apart from these major advances and retreats of the ice sheets climate change was continuous and warm periods and cool periods alternated, the changes often occurring quite rapidly. The other two human species disappeared, possibly from a combination of climate change and pressure from our ancestors.

Until fairly recently (around 12,500 years ago) our ancestors were all hunter-gatherers. The next major change has always been assumed to have been the development of agriculture, resulting in the abandonment of the nomadic way of life. In fact, curiously enough, the beginnings of settled existence considerably predated the development of agriculture. The adoption of a sedentary existence may well have been the result of genetic change. Hunter-gatherer societies, both then and in more recent times, are much too violent to adapt to a settled existence in larger groups. Hunter-gatherer societies are in fact the most violent of all human societies, with a death toll from murder and incessant warfare that makes the most violent neighbourhoods in the most violent modern cities seem like oases of peace.

The contention, amply supported by genetic evidence, that human evolution has been continuous right up to the present day, is the part of the book that has upset a lot of people. It implies that human populations that have remained relatively isolated from each other have not only continued to evolve, they have evolved separately. In other words, racial differences are real. Many of the major human groups, including Caucasians and east Asians, made their appearance quite recently.

Wade is, understandably, very cautious in dealing with the dreaded subject of race. He avoids the subject of intelligence as much as possible although he does point out that Ashkenazi Jews have significantly higher IQ scores than any other existing human population and that this seems to be a very recent development, probably occurring some time between 800 and 1700 AD.

Wade also points out that the story is not yet over. Just as modern humans are genetically distinct from our ancestors, our descendants are likely to be distinct from us.