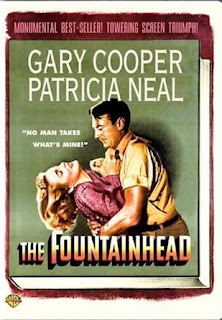 I’ve just watched the 1949 movie adaptation of Ayn Rand’s The Fountainhead, directed by King Vidor.  When Warner Brothers employed Rand to write the screenplay for the film they rather naïvely gave her complete creative control. Her contract stated that not one line of her dialogue could be altered. Perhaps they assumed that she would not make an issue of it if changes had to be made. If they thought that they were very mistaken indeed. Rand held them to the letter of her contract. As a result the movie is extraordinarily faithful to the spirit of the book. It presents Rand’s ideas in a very uncompromising manner.

I had read the book not that long before seeing the film. It’s the only book of hers that I’ve read so I can only judge her on the basis of that one book. The problem with Rand is that almost everybody (even those who have never read her) have incredibly strong feelings about her philosophy, either for or against. I don’t actually want to talk about her philosophy. I want to consider her purely as a social critic, and I happen to think that in that role she was remarkably perceptive and prescient.

For those who haven’t read the book it’s the story of two architects. Peter Keating is a third-rate architect but his great strength is that he has no opinions of his own. As he himself admits, he’s never had an original thought in his life. He simply copies whatever happens to be popular and fashionable. As a result he becomes very successful indeed.

Howard Roark (the hero of the book) is a very different sort of man. He stubbornly insists on going his own way, refusing to compromise his vision in any way. If nobody wants to employ him as an architect, if nobody wants to build the buildings he designs, it makes no difference to him. He will not alter a design to please a client. He thinks for himself and he has no interest in what other people think. As a result he has virtually no clients and is forced to take a job as a labourer in a quarry.

Rand understood very clearly that the odds are heavily stacked in favour of the Peter Keatings of this world. It is very much easier to be a Peter Keating than it is to be a Howard Roark. Being a Peter Keating means you’re guaranteed of safety and security, and of social approval. Rand also understood that not only are most people terrified of the idea of thinking for themselves; they hate and fear anyone who does think for himself.

The other key character in both book and film is Ellsworth Toohey, a columnist on a popular newspaper, The New York Banner. Toohey is a type that has become very familiar to us. He’s a textbook cultural Marxist. He espouses equality, and he believes that the best way to achieve equality is to grind down anyone who is exceptional in any way. But as is the case with all cultural Marxists, what Toohey really believes in is power. Toohey has spent years creating a power base for himself within the Banner, slowly and surreptitiously infiltrating the paper with his own supporters. No-one, least of all the paper’s owner Gail Wynant, has noticed this happening. Now it’s Toohey who is in control.

This is a remarkable prediction of the methods of cultural Marxism, of their “long march through the culture.” And Rand seems to have recognised the danger this represented before anyone else did.

The sad history of the past few decades - the triumph of cultural Marxism, the fact that most people would happily embrace politically correct group-think, would not have surprised Rand at all. Nor would she have been surprised by the craven and grovelling manner in which big business has caved in to every demand by the Cultural Left - she predicted this as well in The Fountainhead, in the fearful acquiescing to “public opinion” of the various boards of directors who reject Howard Roark’s designs.

I’m not a follower of Rand, but there’s no question she was farsighted and provocative. The Fountainhead is worth reading, and the movie is worth seeing.
Posted by dfordoom at 1:26 AM No comments:

I’m a big fan of the movies of Hollywood’s golden age and I belong to several online movie communities. From time to time the question gets raised - why do modern audiences have such an enormous resistance to the idea of watching old movies?

The answer that was duly wheeled out was that modern viewers are alienated by the trappings of the past. The cars look different. The furniture looks like the furniture in their grandparents’ house. The clothes are different. Everything is old-fashioned, so to modern movie-goers watching an old black-and-white movie is like visiting a museum.

I wonder if that's what is really going on? I have my doubts. Modern audiences will cheerfully watch movies and TV series set in the past. The success of movies like LA Confidential and TV series like Mad Men proves that. In fact the popularity of the BBC’s endless Jane Austen adaptations shows that modern viewers are quite happy to watch a TV series set two hundred years in the past. So why should a 1940s movie present any problems?

It obviously isn’t the clothes or the furniture or the cars. In fact if anything those elements are probably a plus to viewers of today, if we are to judge by the popularity of retro blogs. Retro fashion and retro style are big.

So what is the answer?

I think it's the values represented by old movies that confuse and frighten modern audiences. They can't comprehend a romantic comedy where a man and a woman go out to dinner and don't end up in bed together. They can't understand characters in movies who take their marriages seriously. They are dumbfounded by the idea that people used to put duty before selfishness. Their blood runs cold when they see characters who sacrifice themselves for others. They are mystified when characters in a movie volunteer to serve their country by joining the army. And they are reduced to abject terror by the fact that these people in these old movies had high moral standards even though they didn't mouth the proper politically correct platitudes.

People today know they are unhappy and dissatisfied by their lives. They know that people in the past didn’t feel that way. In the mid-twentieth century people went off to work every day, they got married and they had kids. And they were happy. What if those people in the past knew something that we don’t know? Old movies are a disturbing reminder that people used to live by different values, and were apparently happy and content.

So modern audiences run back to the comfort of modern movies where people have the morals of alley cats but never say anything politically incorrect. That way they won’t have any upsetting thoughts.

Posted by dfordoom at 8:22 PM No comments:

the upcoming Australian election - no chance to choose

The upcoming Australian election is a perfect example of the Tweedle-Dee and Tweedle-Dum politics I was talking about in my last post. The election will be fought on personalities. The only actual issue at stake will be the endemic corruption within the Labor Party, but there will be zero genuine debate on policies.

No matter which party wins we will continue to have mass immigration and our cultural identity will be further eroded.

No matter which party wins we will continue to have a doctrinaire commitment to globalisation and free trade.

No matter which party wins we will continue to have uncontrolled bureaucracy and big government.

No matter which party wins the personal freedoms we have lost over the past few decades will not be restored to us.

The Australian people have never been given a chance to make a decision on these crucial areas of government policy. They will not be given that opportunity this September either.
Posted by dfordoom at 4:38 PM No comments: