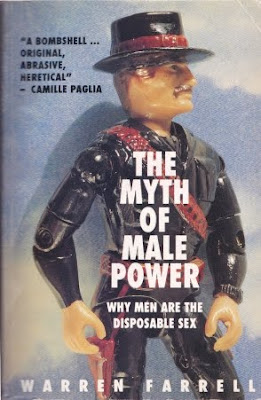 Warren Farrell’s The Myth of Male Power is an important book with some important truths to tell, but it is also a deeply flawed and deeply problematical book. The problems with the book can be laid at the door of its author’s inability to understand that a left-liberal pro-feminist critique of feminism is likely to miss the point.

Farrell was a self-identified and active feminist for several decades before supposedly recognising in the early 90s (this book came out in 1993) that men were being victimised by feminism. He is now a proponent of a rather wobbly theory he calls gender transition which he believes will rectify the problems with feminism and lead us all to the Promised Land of gender equality, fairness and justice.

The key to Farrell’s thesis is firstly that traditional sex roles did not discriminate against women, that men had apparent power but this was balanced by responsibilities to protect women and children, often at the cost of men’s lives. Men and women had different areas of responsibility and exercised power in different spheres and in different ways. Much of this still remains in today’s feminist world. Men are still expected to die in defence of women and children, and they still do. Most obviously they do this as soldiers and in other highly dangerous jobs such as fire-fighting. Less obviously practically every dangerous job, from truck-driving to commercial fishing, was and to a great extent still is male-dominated. Men are ten times more likely than women to be killed at work, and infinitely more likely to suffer disabling injuries, often in overlooked jobs such garbage collection where the hazards can be terrifying. All of this is most certainly true.

The second strand to his argument is that feminist claims that women are still discriminated against are nonsense. Even the argument that men earn on average more money turns out to be a myth since men are saddled with much greater financial responsibilities in areas like child support. Men might earn more money but a large proportion of their income ends up in the hands of women. Again this is most certainly true.

Men also face savage legal discrimination. Farrell identifies a dozen different defences that women can and do use when arrested for a crime, defences that are available only to women. The result is that men are much more likely to go to prison, even for committing the exact same crimes as women, and they are likely to serve much longer sentences, again even for committing exactly the same offences. In the US men are much much more likely to receive the death penalty, and once again this applies even when the crimes are identical. Again this is unquestionably true.

Men face further hazards. Divorce and child custody laws are biased against men, and when it comes to dating men walk a legal minefield where one unwise or even unlucky move can lead to imprisonment for sexual assault, in many cases on the basis of extremely dubious evidence.

So far there is nothing to disagree with here. The problems come when Farrell proposes solutions. Solutions such as “gender transition” and “Stage II” marriages. This sounds worryingly like woolly-minded liberal pop psychology feel-good thinking.

Farrell is unable to escape from the prison of his own left-liberal bias. As a result his criticism of feminism is superficial. He clings to the belief that feminism can somehow be made less hostile to men, that a kinder, gentler feminism is possible. This is a fantasy. Feminism is an ideology of hate. Not just hatred of men, but hatred of women. Especially hatred of women. Feminism confounds equality with sameness, just as liberalism in general does. Feminism therefore wants men and women to be the same. It cannot accept that a fair and just society might be a society in which men are free to be men and women are free to be women. Men and women must be made the same. The idea that men and women might be of equal value but fundamentally different is anathema to feminism.

Farrell is unwilling to challenge feminism at fundamental levels. He is a feminist who believes that a bit of tinkering can fix feminism and then everyone will be happy and free in the caring sharing and nurturing Brave New Word of Liberal La-La Land.

Farrell remains at heart a male feminist and like almost all male feminists he is deeply uncomfortable with his own masculinity and with masculinity in general. And being a feminist he is terrified of the concept of femininity. He wants to emasculate men, but in a nice way. A caring and sharing way. Ideally men should emasculate themselves and then learn to love their new emasculated selves.

His belief in a Liberal Disney World view of reality leads him to further egregious errors. Since men have been killed at a disproportionate rate in war, he seems to think that war should simply be eliminated. Because it’s wicked and liberals find it upsetting. Good luck with that Warren. Admittedly he was writing in the 90s, when the uncompromising nature of Islamic jihadism was less obvious and pacifist ideas were slightly less absurd than they are now.

He cannot accept organising a society taking into account traditional sex roles might in fact be a saner and more successful way of organising a society and might in fact have made people happier than our current hate and guilt-riddled socially engineered world. He cannot being himself to accept that the social engineering of the past half-century has been catastrophic not because it was done the wrong way, but because it was done at all. being a liberal he clings to the delusion that everything is a social construct and therefore everything that liberals don’t approve of can be magically eliminated thus ushering in a happy-clappy future.

I don’t want to be too hard on Farrell. For anyone to question any of the sacred cows of Political Correctness takes courage these days and very few academics today possess that courage. There are within our universities many many people who are sceptical of Political Correctness but most are far too cowardly, too frightened or too attached to their cushy academic jobs to speak out. Farrell has, predictably, been savaged by the attack dogs of academic feminism and to his credit has not backed down.

He has much to say in this book that is important, truths that are being energetically suppressed by our political and academic elites and by the mainstream media. His arguments about the discrimination faced by men are well-documented and backed with copious references. These things need to be said. It’s just a pity that he doesn’t take his arguments far enough and that the solutions he proposes are fuzzy and woolly-minded.
Posted by dfordoom at 6:01 AM