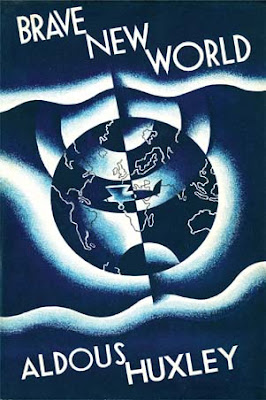 The two most famous anti-utopian novels ever written are of course George Orwell’s 1984 (published in 1948) and Aldous Huxley’s Brave New World (published in 1932). There are many similarities, especially in the structure. Looking deeper however there are striking differences in both the tone and in the ideas being put forward.

In both cases you have a totalitarian society in which there appears to be no dissent, in both cases you have a hero who rebels, in both cases we discover there are actually quite a few hidden dissenters although they have no hope of changing things, in both cases someone at the top reveals the actual workings and motivations behind the societies. Clearly 1984 was influenced by Brave New World. But the two writers, while they may have shared some of the same fears, had radically different agendas.

You can understand 1984 without knowing anything about Orwell or about the time at which it was written. You have no chance at all of comprehending what Huxley is on about without knowing at least something of the man and of the era in which he wrote it.

Brave New World was a response to the First World War, the Great Depression and what seemed to many people at the time to be the threat of imminent social collapse. The chaos of war followed by economic chaos scared people badly. Democratic institutions appeared powerless to avoid catastrophe.

Aldous Huxley was not immune to all this. He flirted with various loopy ideas from pacifism to eugenics. And not just flirted. He took this sort of stuff seriously.

Huxley saw other dire threats to civilisation as well. In 1926 he had visited the United States and had been extremely distressed by what he saw. America was apparently full of people who were enjoying the fruits of material prosperity, buying fancy clothes and cars, going to speakeasies, dancing the Charleston, listening to jazz, going to the movies and generally having fun. For Huxley this was a glimpse of a nightmare future world.

Like most intellectuals Huxley was horrified by the lower orders. Given the choice they’d prefer dancing to reading Aldous Huxley novels. Huxley had been hanging around with the Bloomsbury set where being part of the artistic avant-garde was far more important than having fun.

Huxley was also prone to spiritual yearnings. He saw modern life as meaningless, and this he could not accept. Of course an ordinary person would have simply gone to church but intellectuals find such simple solutions deeply unsatisfying. Huxley needed a Spiritual Quest. It would eventually lead him into the foetid swamp of new age mysticism and drug-induced visionary silliness (and make him a hero to the drug-addled hippies of the 60s).

All of this accounts for the ambivalent tone of Brave New World. Yes, he does think the future world of the Year of Our Ford 632 is a nightmare. But he doesn’t see it as a nightmare because it’s a totalitarian state in which dissent is not permitted. He sees it as a nightmare because there’s no room for God or for suffering. Huxley was suspicious of both communism and capitalism because they seemed to leave no room for God. It’s not the lack of freedom that bothers him so much as the excess of fun. And it’s the wrong sort of fun. The people of the future are busily playing games like centrifugal bumble-puppy and electro-magnetic golf. Instead of reading Aldous Huxley novels. It’s too much like the horrors of jazz and the movies and the Charleston. It’s hideous lower-class fun. The novel is saturated with snobbery and anti-Americanism.

It might sound like I’m doing a thorough hatchet job on both Huxley and Brave New World. That’s not my intention. It’s simply that this is not a straightforward condemnation of totalitarianism in the sense that 1984 is. It’s a complex book and it contains many profound insights. It’s just that they’re mixed in with some very dubious ideas and a certain amount of arrant nonsense.

Like so many intellectuals Huxley was tempted by the idea of a kind of soft totalitarianism, a totalitarianism with a smiling face, a totalitarianism for our own good. The Controller, Mustapha Mond, is not a bad man. He genuinely cares about the happiness of his people and he honesty believes that stability is more important than freedom. He’s a benevolent dictator, a concept that many intellectuals find irresistibly attractive. Most of them are convinced that they personally would make excellent benevolent dictators.

One gets the feeling that the book is not so much a warning of a horrific future as a warning that this is a future that might become necessary if we don’t behave. If we don’t listen to Nanny she will force us to listen. In a kind and caring way of course.

A horrifying number of Orwell’s predictions have already come true. We already have Newspeak and Thought Crime in the form of Political Correctness. History is routinely rewritten to make it more politically correct. We already have a constant series of manufactured crises to justify restrictions of our freedoms. In Orwell’s novels the crises came in the form of never-ending wars. In our case they come in the form of never-ending threats of environmental catastrophes to which intellectuals react in the way intellectuals reacted to the crises of Huxley’s day - they call for world government run by intellectuals. Democracy can’t be trusted to deal with such grave matters. We should let the Experts take over.

Huxley’s predictions are coming true as well, although perhaps in less immediately obvious ways. One of the most interesting and most penetrating of his insights was that sexual freedom could be used as a means of social control. Sexual freedom in effect becomes a prison. By undermining marriage and the family (in the Year of Our Ford 632 supplanting those things altogether) people are left with only one loyalty, one source of emotional comfort - the state. Today we confronting the same situation as the Nanny State takes over from the family and we are experiencing the paradox that the more sexually free we are, the less free we are in every other way.

That’s really the great strength of this novel - it predicted soft totalitarianism long before anyone else had even considered the idea. It’s the first appearance in print of the now-ubiquitous Nanny State. Huxley was also prescient in seeing that a world without God could only survive by becoming a world of children. The infantilising of the population, the avoidance of any responsibility, the obsession with immediate gratification, all of which are now almost universal, was a major insight. The idea that a population could be infantilised by offering them unlimited sexual gratification was an exceptionally brilliant prediction.

So despite its ambiguity, its ambivalence, its woolly-minded mysticism, Brave New World is essential to an understanding of the nightmare world of the modern west.
Posted by dfordoom at 7:52 AM