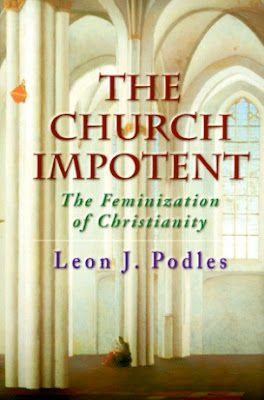 In his 1999 book The Church Impotent: The Feminization of Christianity Leon J. Podles attempts to answer the question - why have men abandoned Christianity?

It’s an intriguing and thought-provoking book and it certainly sheds a great deal of light on the extent of the problem and points to many of the causes. Ultimately though it fails to put forward a satisfactory solution.

Part of the problem is that the author often gets very close to the heart of the matter but then seems to lose his nerve and draw back. He often does this, frustratingly, just at the point where a little more boldness might have achieved a breakthrough.

Having said that, there is still a great deal of pertinent and important material here and Podles certainly demonstrates much greater courage in pursuing the question than the contemporary leaders of Christian churches.

One very interesting point that is made early on is that it’s not that religion has inherently less appeal to men than women. Even in the modern world both Islam and Judaism do not suffer from this problem of not being able to attract men. Even more interestingly, nor does Orthodox Christianity. Unfortunately while he does pursue this point he doesn’t pursue it far enough.

An easy explanation would be that there is something wrong with men. He explores this in considerable depth and comes to the correct conclusion that the fault lies not with men but with the churches. He does mount a spirited defence of masculinity, which is refreshing.

A large part of the trouble clearly lies with the feminisation of our society in general. If there is no place for men in society then clearly men will feel that there is no place for them in a Christianity that reflects modern society. If men no longer have a role as fathers, and if men no longer have a meaningful relationship with their children, then they are unlikely to find much use for religion. This is an issue that I feel that he needed to explore much more aggressively.

He points out that the disparity in numbers between men and women is not a recent phenomenon but dates back at least a couple of centuries, possibly even as far as the Reformation. This is hardly surprising since the forces that are destroying western civilisation have been at work at least since the French Revolution - the evils of socialism, liberalism and feminism. He makes some interesting points about the anti-male bias of 19th century movements dominated by women such as the Temperance movement, movements that were among the primary sources of modern feminism. He seems reluctant though to accept that liberalism is fundamentally anti-Christian. Liberalism will either seek to destroy religion, or tame it to the point where it becomes merely another variety of feel-good do-goodism.

Although he touches on the problem he doesn’t really fully confront the truth that modern feminised Christianity is not Christianity at all. For the women who still attend church Christianity is either seen as a branch of feminist politics or as one of many vaguely spiritual options. Modern Christianity is just fuzzy new age spirituality with a few Christian props.

A very important point made by this book is that churches are not just failing to attract men. They are failing spectacularly to attract heterosexual men. The men they do attract are either homosexual or they’re emasculated men, men riddled with guilt over their own maleness. They’re homosexual wannabes or men so enthusiastic to get in touch with their inner femaleness that they’ve abandoned their maleness entirely. This is reflected in the many cowardly attempts to create a new revisionist female-centred non-sexist homosexual-friendly Christianity.

Despite not going far enough (in my personal opinion) this is still a very important and provocative book and I recommend it very highly. And not just to Christians, but to anyone concerned with the suicidal tendencies of present-day western civilisation.
Posted by dfordoom at 10:10 PM