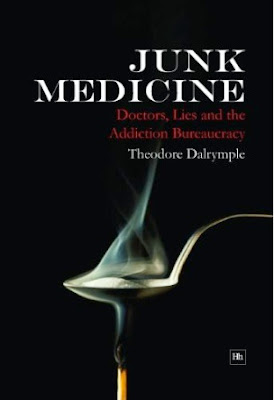 In Junk Medicine Theodore Dalrymple argues that everything we know about heroin addiction is wrong. Or at least, everything that is taken for granted about this subject is wrong.

Dalrymple spent many years as a doctor in both an inner-city hospital and a prison in a major British city so he’s had ample opportunity to see the problem at first hand.

The fact that addicts tell outrageous lies will come as no surprise to anyone who has ever actually met an addict, but far more shocking is the fact that the same lies are not only believed but actively propagated by doctors, nurse, therapists and counsellors working in the field of addiction.

Dalrymple also explodes the myth that addiction forces people into crime. He argues that the reality is quite the reverse. People start off by becoming involved in criminal subcultures and then become addicts.

Addiction is not merely a choice, it’s an attractive choice. It absolves the addict of all adult responsibilities.

Treatment methods such as the use of methadone are entirely useless. In fact any kind of treatment that starts from the proposition that addiction is a medical problem is bound to fail. Dalrymple’s prescription is simple - we should close down all drug treatment clinics. The only purpose they serve is to provide employment for doctors, nurse, therapists and counsellors. A bloated taxpayer-funded bureaucracy has come into being that exists only to perpetuate itself.

Dalrymple also takes aim at the drug-fueled literary tradition that has given opiate addiction a false glamour. He suggests that poets such as Coleridge and Baudelaire might well have produced a good deal more worthwhile work had their brains not been addled by drugs. His reserves his especial venom for William S. Burroughs, and rightly so.

Dalrymple is always provocative but given the fact that the growth of the addiction treatment industry has coincided with a spectacular growth in the number of heroin addicts one has to admit that he has a point.
Posted by dfordoom at 5:46 PM