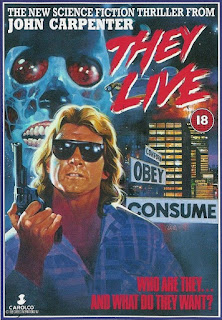 John Carpenter’s They Live came out in 1988 and it’s an odd mixture of political satire, action movie, paranoia movie and 1950-style monster movie. It’s also surprisingly interesting from a political point of view.

We start with Nada, an ordinary working class guy desperate to get a job. He finds a place to live, in a shanty town in Los Angeles. There’s a very strong sense of unease. We get the feeling that this is not quite our world. There’s an incredible gulf between rich and poor. There’s massive unemployment and poverty and there’s homelessness on an enormous scale. The police behave more like an occupying army than a police force.

TV is everywhere. Even in the shanty town there are TV sets. TV programs focus on the lifestyles of the rich and on conspicuous and extravagant consumption. The shanty town dwellers have nothing but they watch TV shows about people who have everything.

Something is wrong. People know that something has gone wrong but they have no idea what it is. The unease gradually changes to outright menace. The church across the road from the shanty town is raided by the police who start shooting people and then demolish the shanty town. The police have lots of helicopters. They watch everything.

Nada is puzzled that the church across the road is hosting choir practice at 4 o’clock in the morning. He takes a look around. lt turns out that there’s no choir practice going on - that’s just a tape that’s playing. He finds a hidden compartment behind a wall, filled with boxes. He’s  no thief but his curiosity is not going to let him leave without taking one of the boxes with them. He’s disappointed to find that it contains nothing but sunglasses. Then he puts one of the pairs of sunglasses on and everything changes for him. They’re not ordinary sunglasses. They allow the wearer to see reality. What everyone is seeing is not reality but a kind of hypnotically induced dream state. Reality is very different.

The advertising posters don’t actually advertise anything. They carry messages and the messages are relentless - obey, consume, keep sleeping, conform. Even worse, the people of L.A. aren’t all humans. Many are monsters, clearly aliens. The rich people are mostly aliens. The poor people are all humans. Earth has been occupied by invaders from outer space. Their intention does not appear to be to massacre us but to exploit us for profit.

The influence of the classic 1956 Invasion of the Body Snatchers, another movie with interesting political subtexts, is obvious.

Nada and Frank intend to fight back. They find a resistance group but the aliens know all about it.

The movie was intended as a response to the 80s in general and to Reagan’s economic policies in particular. Despite this it’s a movie that doesn’t seem dated. It’s possibly more relevant today than it was in 1988. As Carpenter puts it in the accompanying interview, in many ways the 80s never ended. Consumerism and social control are arguably much bigger problems today than in 1988. The aliens obviously represent the ruling class, interested in ordinary people solely as a source of profit. There’s nothing subtle about the satire here. It’s delivered with a sledge hammer. 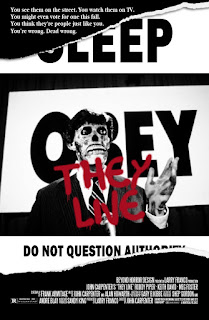 This is very much a left-wing movie. This is not a movie that can be given a left-wing interpretation. It absolutely nails its colours to the mast. It is overtly and defiantly left-wing. What’s incredibly interesting is that it is also in every way a very socially conservative movie, and a very old-fashioned movie. Even more interestingly for a movie made in 1988 it doesn’t look back to the 60s as a golden age - it actually looks back to the 40s and 50s, and even earlier to the New Deal era.

As is made clear in the 2013 interview with Carpenter included in the DVD he made a deliberate and conscious choice to tell the story from the point of view of the working class, and to have a hero who is very much working class. This is extremely important since this makes They Live left-wing in the Old Left sense rather than the New Left sense. It was made at a time when the organised Left in the U.S. (and in the Anglosphere as a whole) was already losing interest in class and economic issues and beginning to embrace identity politics and social rather than economic radicalism. Whether Carpenter consciously identified with the Old Left or not (and his expressed admiration for New Deal socialism suggests that he was at least unconsciously taking this stance) this is pure Old Left stuff.

This is a very heterosexual movie. A modern SJW would undoubtedly condemn it as being outrageously heteronormative. Everybody in the movie is heterosexual. It is simply taken for granted.

It’s also interesting that the two protagonists are old-fashioned gentlemen. They treat women with respect. When Nada meets Holly, despite the circumstances (he has to kidnap her at gunpoint) he still behaves like a gentleman. He doesn't try to take any sexual advantage of the situation and he doesn’t physically harm her in any way. He’s the kind of guy who is interested in marriage rather than casual sex.

This is a movie that attacks consumerism and free-market capitalism from a very left-wing perspective but while the movie is leftist in an economic sense it’s culturally very very conservative. The two heroes just want to get decent jobs that pay enough to let them get married and raise families. They want to live essentially 1950 lifestyles. That’s their idea of the American Dream, and the movie clearly approves of their aspirations. It’s rather depressing that such an overtly left-wing movie with such a clear-cut social conservative message could not be made today.

It’s very much worth a look.
Posted by dfordoom at 2:53 AM