If you want evidence of the deep irrationality that pervades the world today you have only to look at Jewish responses to the rise of nationalist parties in Europe.

For example, this bizarre story in the Jerusalem Post -

After the vote, the Gathering of European Muslim and Jewish Leaders, an interfaith group affiliated with the American Foundation for Ethnic Understanding, vowed to “work closely together to fight Islamophobia, anti-Semitism and xenophobia and prevent the far right parties from realizing their goal of passing a common legislative agenda in the European Parliament severely restricting the rights of religious minorities.”

Stupidity on this scale simply defies belief. The Jews are to serve the role of useful idiots, helping to keep parties of the Left in power, parties that are committed to aiding and abetting the Islamification of Europe. And they have somehow convinced themselves that this will end well for them? They genuinely believe that this will make Moslems well-disposed towards them?

From the Moslem point of view it’s a clever short-term strategy. Anything that helps to keep left-leaning parties in power will allow them to continue to build up their numbers until they are in a position to consolidate their invasion of Europe. After that they will turn on those leftist parties and their treatment of the Jews will become even more savage than it already is.

It’s a classic case of learning the wrong lessons from history. The Nazis were right-wing, therefore all right-wingers must be Nazis. This conveniently ignores the fact that the Nazis were not right-wing. National Socialism was an ideology of the Left.

It also ignores the fact that the new European nationalist parties are the only ones prepared to take a stand against religious violence, which makes them in reality natural allies of the Jews.

It makes one wonder if Jews are really as smart as we’ve been led to believe.
Posted by dfordoom at 6:45 PM 1 comment:

The European Parliament elections have been generally good news, with UKIP winning the largest share of the vote in Britain and the Front National set to do the same in France. Right-wing and/or nationalist parties have improved their vote in most European countries.

It seems that Europeans are finally waking up to the evil empire that is the European Union.

The news from France is especially heartening. Not only has the Front National come out on top, the Socialists have recorded their worst-ever electoral performance.

It will be extremely amusing to see the established parties desperately trying to spin the results and pretend that it isn’t happening.
Posted by dfordoom at 11:40 PM No comments:

Email ThisBlogThis!Share to TwitterShare to FacebookShare to Pinterest
Labels: elections 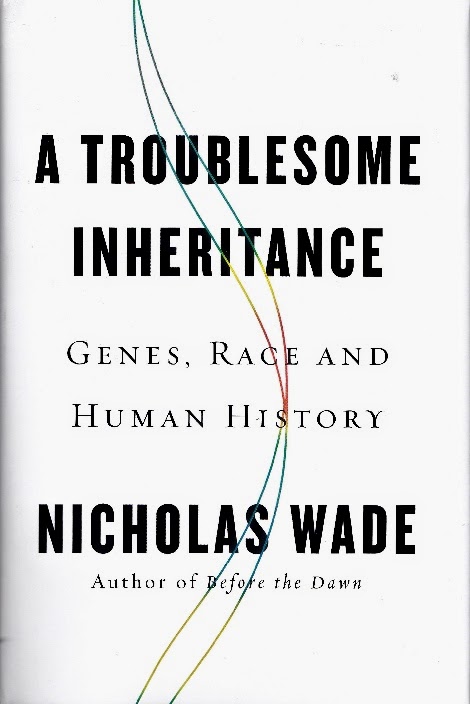 Nicholas Wade’s long-awaited (and for liberals much-dreaded) new book A Troublesome Inheritance: Genes, Race and Human History proves to be as stimulating as one would expect from this author.

The book, as the author states right from the beginning, falls neatly into two halves. The first half presents the fairly overwhelming evidence that human evolution did not suddenly and magically stop at some date in the distant past. The second half, as Wade freely admits, is more speculative as Wade explores the possible ramifications of on-going human evolution.

The scientific consensus since the 1970s has been that race has no scientific basis and that for some obscure reason human evolution suddenly ground to a stop. There’s little doubt that Wade is right in arguing that this consensus (rather like the climate change consensus) is based on a mixture of ideology, wishful thinking and fear. Any scientist who pursues research into the subject of race knows that he is quite likely committing professional suicide and will stand a good chance of being hounded out of academia. The idea that every species on the planet is subject to natural selection with the single exception of our own is clearly patently absurd.

Wade presents the argument, based on recent scientific work, that human evolution is not only still happening but that evolution works far more quickly than we used to assume. Significant changes can occur within a fairly small number of generations meaning that the   effects on humans can be seen within a few centuries. Wade explored this subject in much greater depth in his excellent 2006 book Before the Dawn.

This first half of the book is dangerous enough but the second half is pure dynamite. If humans are in fact subject to natural laws and if evolution does work over comparatively  brief time-spans then there are likely to be very real differences between races. The most important aspect of his argument is that cultural changes can be driven by genetic changes and those genetic changes can then in turn drive (or accelerate) cultural change.

The change from hunter-gatherer societies to agricultural societies that started to occur around 15,000 years ago are likely to have been made possible in part by genetic changes and once the societal change had occurred then evolution, very naturally and inevitably, would lead to further genetic changes. The kinds of social behaviours that are advantageous to hunter-gatherer societies are very different from those that are advantageous to agriculturalists. One telling example is that hunter-gatherer societies that have survived into modern times are extraordinarily violent with truly horrendous murder rates and a positively terrifying death toll from incessant warfare. This is no problem for such societies. If anything it is useful in keeping population numbers low enough to avoid the danger of starvation. Such violent behaviour is not merely disadvantageous to agricultural societies; it would make such societies entirely untenable.

The same argument applies to the change from small-scale agricultural communities in which a tribal organisation is extremely useful to urban communities and the development of modern states, in which tribal organisation is entirely unworkable. Some genetic changes may well have played a role in this transformation of human society and once the transformation was underway those genetic changes, such as a considerably lower propensity to violence, would accelerate.

Wade extends the argument further, drawing on the work of British historian Gregory Clark, arguing that the Industrial Revolution may have been partly fueled by small but significant genetic changes and that these changes occurred in some parts of the world such as Europe but did not occur elsewhere. This provides a convincing explanation for the extraordinary and dramatic dominance of the West over the past few centuries. It would also explain the otherwise mysterious fact that attempts to impose western-style economic and political systems in places like Iraq and Haiti have failed so dismally, and for the equally mysterious but undeniable fact that massive amounts of foreign aid have failed to produce any benefits in the majority of African countries.

Wade is clearly aware that he is walking into a minefield and at times, not surprisingly, he treads very carefully. On occasions, especially when dealing with intelligence, he refrains from connecting up the dots although the dots are certainly there to be connected. I don’t think Wade can be blamed for this. He goes as far as it’s possible to go in the current repressive political climate and to have connected up some of those dots would have meant giving up any hope of having the book published.

As it stands A Troublesome Inheritance is an audacious, provocative and immensely stimulating book. Both the author and the publisher (The Penguin Press) are to be commended for having the courage to publish it. Very highly recommended.
Posted by dfordoom at 2:27 PM 1 comment:

the sad plight of a once-great nation

It seems that in modern politically correct Britain halal meat is becoming more or less compulsory. Needless to say the Leftists who are usually beating the drum about animal rights are not saying a word about this. Being politically correct is clearly more important than animal welfare.

Mind you, nothing about cowardly cringing modern Britain surprises me. Not even the fact that you can now get arrested for quoting Winston Churchill.
Posted by dfordoom at 2:58 AM No comments: