symbolic victories, and hesitation as censorship

One of the reasons the Leftists are winning the culture wars is that they understand the importance of symbolic victories. They know that symbols matter. That’s why they’ll fight so hard for things that initially appear not to matter very much. Because they do matter. Words and symbols are important, and making us feel hesitant about using certain words or performing certain symbolic acts matters very much. They also understand the importance on instilling fear. Not physical fear, but the fear of offending, the fear of being labelled as racist, sexist, etc.

The flag is a good example wh 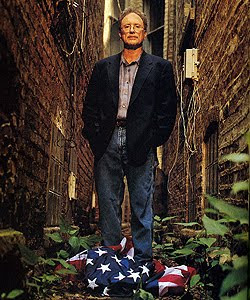 en it comes to symbols. When President Obama’s political mentor Bill Ayers gets away with literally trampling the American flag (and gets to keep his well-paid job at an American university) a significant symbolic victory has been won for the Left. It’s not a flag that is being trampled, it’s a set of beliefs. Beliefs about loyalty, honour, duty, sacrifice.

Similarly when a leftist Australian academic tells us that it’s racist to fly an Australian flag the same beliefs are being attacked.

Words matter even more. Back in the 70s when feminists started to demand than manhole covers should be renamed personhole covers we laughed. We were wrong. It was part of the long-term strategy of the Cultural Left - to put certain words and certain ideas out of bounds. To make us hesitate before expressing our thoughts, our opinions.

They have succeeded. Can there be any conservative blogger (or conservative journalist or conservative politician or even just conservative citizen) who has not at some time caught themselves in the act of self-censorship? You’re about to write something, or say something, but then you ask yourself - am I going to be accused of racism, sexism, homophobia, transphobia, Islamophobia, cultural insensitivity, fascism, neocolonialism, ableism or any other forbidden act if I say that?

Once that happens our right to freedom of speech is in grave jeopardy. Indeed all our rights as free citizens are in grave danger.

As Peter Hitchens puts it in a slightly different context, the boundaries of public discussion are being steadily narrowed.

Recently we’ve seen moves by feminazis and other politically correct types to add terms such as feminazi and political correctness to the index of forbidden expressions. If there’s one thing Leftists hate it’s having their own weapons turned against them. For years they’ve tried to stifle debate by throwing out words such as racist, sexist and fascist as soon as the start to lose an argument. When conservatives hit back by using words like ecofascist and feminazi it turn out that Leftists have a glass jaw.

The ideal censorship is the censorship we impose on ourselves. That was the objective of the Party in Orwell's 1984, the reasoning behind Newspeak - that eventually the Thought Police would be unnecessary because people would no longer be capable of Thought Crime. They would no longer have the words to express dissent and everyone would have inside their own heads their own internal Thought Police.
Posted by dfordoom at 2:48 PM