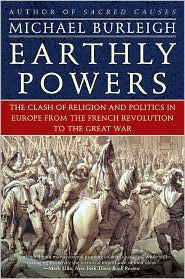 Michael Burleigh’s Earthly Powers is a fascinating history of religion and politics from the French Revolution to the First World War. It was published in 2005 and followed in 2006 by a second volume, Sacred Causes, taking the story up to modern times.

Burleigh is an academic who has taught at Oxford among other places. How a non-Marxist like Burleigh ever got a teaching job at modern British university remains a mystery. He is also open-minded and not hostile to Christianity, which adds to the mystery.

For anyone who thinks the culture wars are a modern phenomenon this book will come as a revelation. The culture wars started in earnest with the French Revolution. And raged throughout the nineteenth century. Most bitterly of all in France where anticlericalism became a kind of secular religion, but also in Italy and in Germany and indeed the whole of Europe. The main theme of the book is the rise of secular substitutes for religion, most notably the idea of the state as a focus for religious devotion.

Some religious leaders, most notably some of the nineteenth century popes, fought back, but mostly the nineteenth century saw the Christian religion not merely on the defensive but adopting the kind of defeatist attitudes that have become so characteristic of mainstream Christianity in our own day. Most fatally the century saw Christianity implicitly accepting the new superiority of the state and falling back on a species of vaguely Christian socialism or do-goodism or various other compromises with the rising tide of liberalism.

Bismarck’s war on Roman Catholicism, the kulturkampf, was a key struggle.

The end result was the exaltation of the state as an alternative religion, a development that would have catastrophic consequences in the twentieth century. The willingness of the disciples of Reason to resort to mass murder (a quarter of a million people were slaughtered in the suppression of counter-revolutionary revolts in the Vendée during the French Revolution) was a particularly chilling foretaste of the future.

In the nineteenth century though the culture wars mostly followed the pattern we are familiar with today - bitter struggles to control the education of the young and to undermine the family.

A superb and fascinating book presenting an almost unique view of the history of the nineteenth century as essentially a religious struggle.
Posted by dfordoom at 4:22 AM